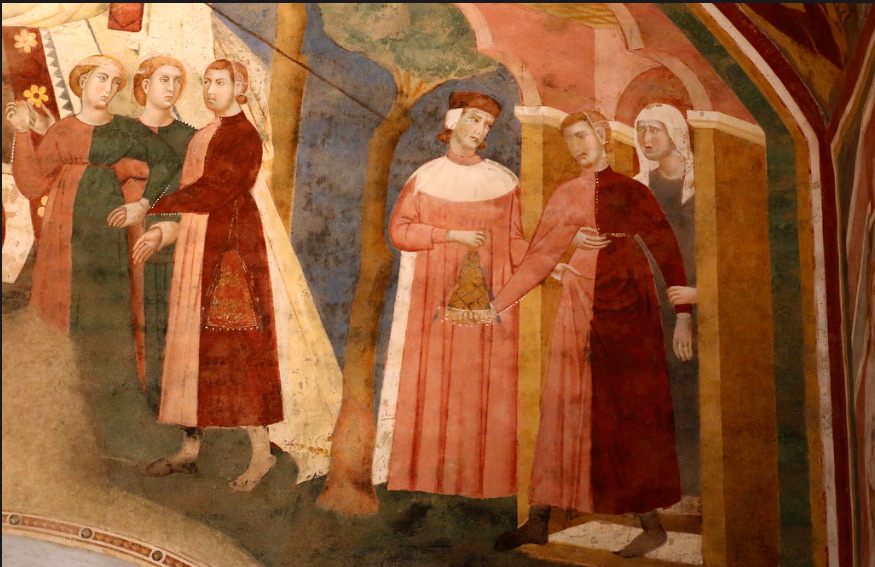 If there are no artists in your family, you cannot help but wonder where your art genes came from. A number of artists I know have an architect or designer or someone in the visual arts in their backgrounds. For my entire life, I believed that I was a unique acorn. Turns out that there was a very large oak tree in my backyard from the 14th century.

Recently, I learned from a family member that our ancestor is Memmo di Filippucci, a 14th-century painter from Siena, Italy.

That family member is my half-brother and he’s a lawyer, and lawyers like facts. None of us have ever had many facts about our distant relatives so Gunter is currently researching Italian archives in Europe and preparing an ancestry book.

Now I will have to add San Gimignano to my bucket list because Memmo di Filippucci’s (whose sons also became painters) fresco of marital life still exists in the Town Hall in San Gimignano, a small walled medieval hill town in the province of Siena, Tuscany.

(Seen above) “Scenes from a Marriage,” with a hot tub no less!! Memmo has an entire cycle of frescoes titled, “Profane Love,” and some are in quite good condition. The town of San Gimignano itself is legendary for its examples of medieval architecture and castle towers.

Memmo di Filippucci had two sons who were also painters, Lippo Memmi and Federico Memmi. His son-in-law was Simone Martini, one of the most outstanding and influential painters of Siena. In 1317, Lippo di Memmi received a commission to paint a large Maesta in the main chamber of the Town Hall. It is thought that Memmo assisted his son with this work. Memmo may also have worked with Lippo Memmi on the fresco cycle of the New Testament in the Collegiate Church of San Gimignano, completed around 1345.

I find this all astonishing since the primary subject in my work is the medieval warrior, Joan of Arc. She was born one hundred years after Memmo, and five hundred and seventy-four years later, Joan of Arc became my Muse.

In an article in the Santa Fe Journal, I once explained why Joan remained my primary subject for so many years… “She had no formal education, but she dictated remarkable letters about wanting peace. She was ignorant of the world, and yet she changed it. Her short life (she was burned at the stake at 19) was filled with wisdom.” Yes, these are some of the reasons. There are also emotional imperatives that drive me continually back to her but now that I’ve been introduced to Memmo di Filippucci, I can allow myself to believe that there is some genetic predisposition keeping me focused on an ancient historical figure.

For the longest time, I thought I was trying to find her voice. In fact, her legacy still speaks loudly all over the world. I now see that I am trying to find my voice through her. And my voice has just been amplified by some art ancestry. Nice to meet you, Memmo.

Opening last night in MINUS 4 degree weather! Than

Hope to see you at the Opening Friday, February 3r

Stay strong. Hoping for Peace in the Ukraine in th