“I can think of virtually no artist who has devoted the bulk of her career to a single subject. Picasso now and then jousted with his alter ego, the Minotaur. Rodin tinkered with figures from The Gates of Hell on and off throughout his long and productive life. Georgia O’Keeffe did multiple paintings of the same vistas, flowers, even clam shells.  But one single solitary ongoing obsession for nearly 30 years?”

“On occasion, momentary experiences produce some of the most profound sources of creative inspiration. Such was the case for artist Sandra Filippucci when she came face-to-face with the complex and mysterious life of a warrior saint.

It was 27 years ago that Sandra Filippucci “met” Joan of Arc in a tiny chapel in Normandy, France, and it was that brief moment that led Filippucci to create a “3D ‘Perpetual Muse’ combined with traditional techniques,” as Evoke Contemporary reports. On view now through the end of the month, “Joan of Arc: Voices of Light” is a compelling solo exhibition of works from artist Sandra Filippucci. The exhibition, curated by Linda Durham, is named after Richard Einhorn’s masterpiece oratorio “Voices of Light,” inspired by the 1928 film “The Passion of Joan of Arc.”

Via the gallery release: “Who was Joan of Arc? What did she look like? Even with an impossible time machine, one would need a broad, insightful humanity—and an intuitive historical imagination—to unwrap the mystery and mysticism of this iconic heroine. Sandra Filippucci’s powerfully realized works reveal an inspired, masterful, personal interpretation of a subject she knows well and has engaged for decades.” 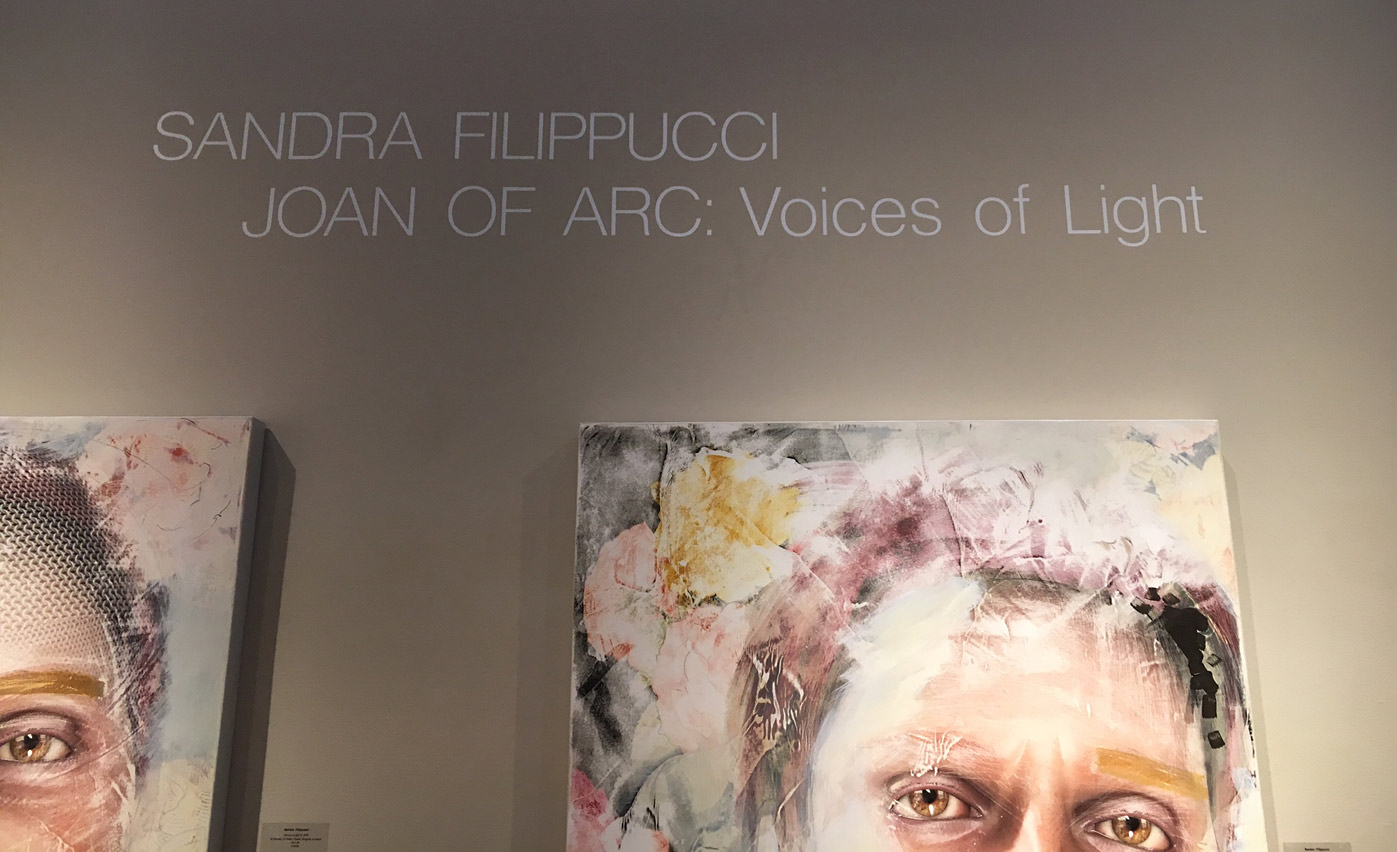 JOAN OF ARC: Voices of Light

Exhibition by artist Sandra Filippucci will open at EVOKE Contemporary in Santa Fe on April 29th and remain on view through May 21st, 2016. The show is curated by Linda Durham. There will be an opening reception Friday April 29th, 5-7pm and the artist will be in attendance.

Sandra Filippucci‘s work draws from her many years of exploration into the complex and mysterious life of warrior saint, Joan of Arc. Twenty-seven years ago, the artist “met” Joan of Arc in a tiny chapel in Normandy, France. Since then, the artist has created a 3D “Perpetual Muse” combined with traditional techniques, and continues to develop her unique interpretation of Joan of Arc—who is as relevant now as she was almost six hundred years ago. Joan of Arc – prepared to fight – actually stood for Peace during terrible times. Not much has changed.

Filippucci’s current body of work, “Voices of Light,” is named after Richard Einhorn’s masterpiece Oratorio written for the 1928 restored film, The Passion of Joan of Arc. Relentlessly questioned (in the film and in the historic record) about who Joan’s “voices” were, what they looked like etc, etc, Joan responded to her inquisitors that it was not possible to describe the voices but that they were both her light and her joy.

“I admire Filippucci’s work on several levels: the subject matter (Joan of Arc); the beauty of the work (amazing faces, forms, flowers); the complex media (3-D rendering and so much more) and the obvious talent and deep commitment– to the subject and to the process–that is so clearly illustrated by the Artist. Who was Joan of Arc? What did she look like? Even with an impossible time machine, one would need a broad, insightful humanity–and an intuitive historical imagination–to unwrap the mystery and mysticism of this iconic heroine. Sandra Filippucci’s powerfully realized works reveal an inspired, masterful, personal interpretation of a subject she knows well and has engaged for decades.” –excerpts from the curator, Linda Durham

About the Curator, Linda Durham

Linda Durham is the founder and President of Linda Durham Contemporary Art in Santa Fe, New Mexico. For over thirty years, Durham operated a gallery that concentrated on representing the painting, sculpture and video work of New Mexico-based artists. The gallery participated in numerous International Art Exhibitions and fairs including events in Edinburgh, Cologne, Madrid and Toronto as well as scores of art expositions in this country (Seattle, Los Angeles, Chicago, Phoenix, Santa Fe, and Miami).

Opening last night in MINUS 4 degree weather! Than

Hope to see you at the Opening Friday, February 3r

Stay strong. Hoping for Peace in the Ukraine in th